A poem in real estate, four blocks, with all mod cons

I Love, I Love, I Love
But Jellis Craig's obsessed -
How shall I end this tale?
L J Hooker, you're the best.
Posted by TimT at 5:56 pm 1 comment:
Email ThisBlogThis!Share to TwitterShare to FacebookShare to Pinterest

JK Rowling has been hailed an “inspiration” after she was asked by a young Harry Potter fan why Hogwarts headmaster Albus Dumbledore was gay.

Rowling, 49, revealed Dumbledore's sexuality almost a decade ago in 2007, after the final book, Harry Potter and the Deathly Hallows, was published...

Dumbledore is quietly gay
In a non-flamboyant way.
No use asking for a list
Of all the men that he has kissed -
Of who and what and when was it -
Dumbledore is in the closet.

Maybe J. K. Rowling knows
If he has a string of beaux -
All we have are empty pages,
A mystery throughout the ages.
No answer to our every query -
Dumbledore is gender theory.
Posted by TimT at 8:58 pm 1 comment:
Email ThisBlogThis!Share to TwitterShare to FacebookShare to Pinterest

The modes of Bell Railway Station

Bell, couchant - a slightly-too-warm late morning in summer. A hot breeze blows from the north. Scattered over the bare concrete of the train station, waiting for the trains, are two or three passengers, here, there. No trains are in sight.

Bell, rampant - a winter afternoon. The city platform is overloaded with Collingwood supporters. The South Morang platform has a solitary Italian grandmother with her wheelie bag. She picks her nose, thoughtfully.

Bell, avec impressionism - Sombre autumn evening sighted through the windows of a slow-moving train. Fluorescent lighting through a patch of drizzle. An atmosphere both magical and squalid.

Bell, avec futurism - midsummer, midday, 40 degrees celsius. Both concrete platforms completely bare. A train, not taking any passengers, rushes past the South Morang platform. On the City platform, a voice over the intercom announces to no-one that the following train will be 15 minutes late. The announcement redounds from the bare black concrete of the platforms onto the bare black concrete of the surrounding car park.
Posted by TimT at 8:12 am 1 comment:
Email ThisBlogThis!Share to TwitterShare to FacebookShare to Pinterest

Sex! I wanted to talk about the party, not the act, though it hardly matters, because you know that old rule about how any sentence that with sex will get your attention? Sex! See, it works! We all know the old classic: "SEX! Now that I've got your attention...." Except, okay, it's not that old, and it's not particularly classic either. But anyway, throw in FREE into the same sentence, it doesn't particularly matter where and in another non-specific SEX location if you throw the word SEX in as well then FREE it SEX doesn't SEX matter FREE what happens, those are the SEX FREE only words people will SEX see after.

In fact even when you're doing something specifically anti-sex, so long as the word is in the sentence that's all that people will notice. Once a few years ago I had written an anti-sex poem for a poetry slam, to inspire raging indifference, apathy, and chastity in my listeners. One of the judges marked me down so much that they knocked me out of the running, with their stated reason being: "I like sex." Fair enough, then.

But anyway, back to the point, the point being SEX, the point in addition being PARTY, and the point not in any way at all being FREE, because haven't you heard? The Sex Party is running for politics. And - such is the motivating force of their name alone - that, no matter who else is on the ballot, a large proportion of the electorate will only be able to see the word SEX followed afterwards by the word PARTY, presumably causing visions of Bacchanalian delights to swim before their eyes, causing their pen to descend as if automatically to the box beside this name....

In short, it doesn't really matter what their policies are or who represents them, I suspect by simply having the name they do, the Sex Party have got the vote of a certain proportion of the electorate - lecherous, unchaste, impure souls that they are - stitched up. Some people would probably even vote for Adolf Hitler if he ran for the Sex Party. It is a genius name, a name so simple that only a simpleton like an advertiser could come up with it.

Being something of a simpleton myself, I feel that this theory could be applied successfully to the other main parties in the election. Sex may be one of the primary motivators of people, but it is not the only one. There's also Greed, and Fear, and many others too. And they do say it's a time for renewal in politics, and renewal starts with the name. Behold my suggested brand changes to the major parties:

Australian Liberals and Australian Nationals - The Coalition of Greed and Fear

Between them I believe the major parties could also sew up most, if not all, of the Seven Deadly Sins. At any rate, that's about all I wanted to say, apart from the obvious: sex.
Posted by TimT at 12:48 pm 1 comment:
Email ThisBlogThis!Share to TwitterShare to FacebookShare to Pinterest

There's nothing like you spending quality time with the cat, and the cat spending quality time with you, on the couch, listening to music, sipping on a drink, possibly nibbling on a biscuit, all while curled up in a lap. You can't do all of these things yourself, of course, and nor can the cat. Even if you wanted to curl up in your cat's lap, you'd have trouble finding it. (Do cats even have laps? If they do they must be slightly more rare than a giraffe's honk, and a tad less so than the proverbial hen's teeth.) So, this is clearly a collaborative effort between you and the cat, and the radio and the cup of something and the biscuit of something, etc. Possibly, if the cat has disported herself across your lapular environs before you have had time to fetch a drink for yourself, you may have to ask someone else to help you fetch it. But that just shows what a complex, interconnected, social world we live in. Multitasking, it's all about multitasking.

Multitasking, my friend. Multitasking.
Posted by TimT at 9:19 pm 1 comment:
Email ThisBlogThis!Share to TwitterShare to FacebookShare to Pinterest

"What the hell's so good about six word fictions?" I found myself thinking the other day. "Now.... five and a half word fictions... there's a REAL challenge...."

And so I set to work on this bold new literary venture. Which I did by putting my notebook away, hopping on the train, and not writing any for the next week.

Finally I did come up with one, on Bell Station the other night (why are train stations and trains so good for this stuff?) Here it is; hold your breath, ladies and gentlemen...

I didn't stop there either. The following is my favourite:

Interestingly, it works just as well (stop laughing!) if you substitute the word "men" for "man". Some pernickety-snitch critics might of course interpret this as a careless slackness of my prose style, but I like to think it demonstrates my admirable versatility.

Speaking of admirable versatility, I kept plugging away at my literary inventing for another three or four lines. Some are too execrable to repeat, but then some were too terrible to have even been begun. So I'll show you the former:

And with that impulsive rush for the chocolate bar, I finish this list of five and a half word fictions. THE FIRST EVER IN THE WORLD PROBABLY. It's right up there with the time I invented haiku or singlehandedly engineered the limerick with thin air and a spare rubber band.
Posted by TimT at 12:15 pm 7 comments:
Email ThisBlogThis!Share to TwitterShare to FacebookShare to Pinterest

In just the sort of deplorable story twist that you have come to expect from me and the Baron, we have recently come in possession of two chickens. (Make that two MORE chickens - that's on top of the seven currently wandering around the backyard looking for plants to devastate and vegetation to wreak their terrible fury on). Aforementioned two chickens are destined for the possession of my mother in law; before they came into our possession they were in possession of two friends of ours, after passing out of the possession of other equally mysterious persons who, presumably, found them in a handbag at Victoria Station.

Which brings me to the real point of my post: names that sound similar are confusing.

Now aren't you glad you read to this point?
Posted by TimT at 1:40 pm 1 comment:
Email ThisBlogThis!Share to TwitterShare to FacebookShare to Pinterest

Zap! Again there's screaming in the street,
Then sirens. Cops, too late - and all they find's
The tiny pitter-pat of teddy feet;
Another victim of a Care Bear crime.

There was a time when love hearts seemed so cool,
And rainbow diamond lasers were in vogue -
But no-one thinks that anymore at school,
Not since that ghastly day the Bears went rogue.

Seems each day now someone we know breaks down,
Statistics of the growing Care Bear scare -
A mounting paranoia grips our town,
As rainbows sizzle through the panicked air.

So kids! Say no to fluffy toys and other thrills,
And twinkle stars and all those Care Bear lies -
They may seem nice and pretty, right until
A Care Bear love heart frizzles out your eyes. 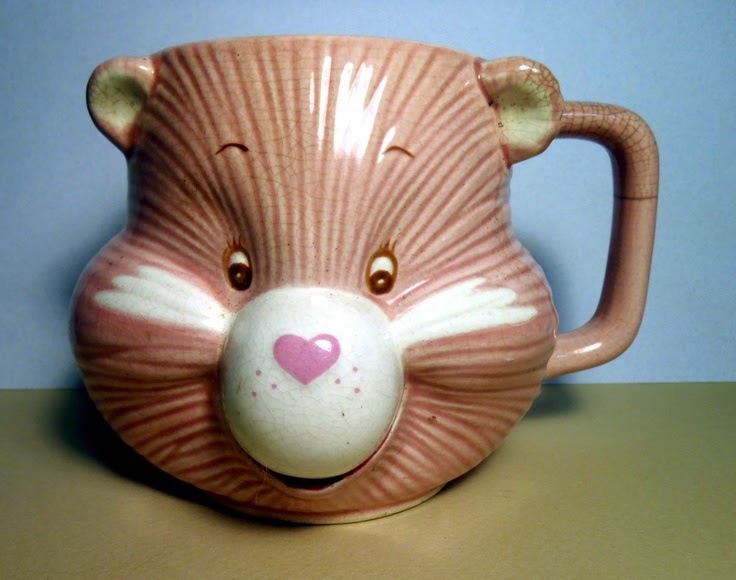 I googled 'Care Bear Mug Shot' and would you believe this is the sort of thing that came up. Shudder!
Posted by TimT at 7:28 pm 1 comment:
Email ThisBlogThis!Share to TwitterShare to FacebookShare to Pinterest

Basically the entire internet, so you can switch your computers off and go home now

A poem that is basically the entire internet

A puppy that sleeps on a cat that is cleaning its kitten!
A turtle that eats while a piglet is wearing a bonnet!
A MOUSE AND A CRAB AND A HAMSTER TAKE TURNS IN A MITTEN!
A dog with a sign with a crudely-spelled message upon it!

A turtle that eats while a piglet is wearing a bonnet!
A lolcat lol cats are so funny so funny so funny!
A DOG WITH A SIGN WITH A CRUDELY-SPELLED MESSAGE UPON IT!
An African princess is asking to send me some money!

A lolcat lol cats are so funny so funny so funny!
A guy who is cute with a duckling that eats from a beanie!
AN AFRICAN PRINCESS IS ASKING TO SEND ME SOME MONEY!
A one-year-old badger! It's wearing a tiny bikini!

A guy who is cute with a duckling that eats from a beanie!
A boy three years old wearing pink BOYS LIKE PINK!
A ONE-YEAR-OLD BADGER! IT'S WEARING A TINY BIKINI!
(This mindblowing cat gif will really make you stop and think!)

A boy three years old wearing pink BOYS LIKE PINK!
A mouse and a crab and a hamster take turns in a mitten!
(THIS MINDBLOWING CAT GIF WILL REALLY MAKE YOU STOP AND THINK!)
A puppy that sleeps on a cat that is cleaning its kitten!
Posted by TimT at 6:35 pm 1 comment:
Email ThisBlogThis!Share to TwitterShare to FacebookShare to Pinterest

Hello! This is Tim on the homophone speaking, can you take the call?

Unspoken rule - something that is not allowed, but not aloud.

UPDATE! - And while we're on the subject,  I suppose you could call a homophone something that is aloud, and usually allowed also. Now aren't you glad I told you that?
Posted by TimT at 5:08 pm 1 comment:
Email ThisBlogThis!Share to TwitterShare to FacebookShare to Pinterest
Newer Posts Older Posts Home
Subscribe to: Posts (Atom)