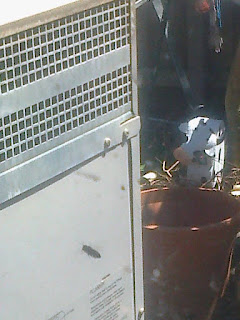 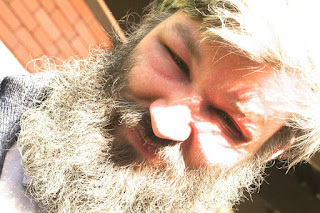 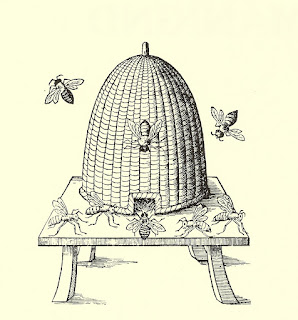 Public art: I have decided that I do not like it very much, and, what's worse, I find that I am having more and more opportunities for not liking it very much, at great length, everywhere I turn, which makes me like it even less.

Politicians, at the best of times, are the sort of people who get excited about paving footpaths deep into the heart of the majestic wilderness, setting fences up, and generally plonking gigantic roadways and tollways and bridges here, there, and everywhere. So much so that it is getting that we can't see the footpaths for the fences for the roadways for the tollways for the bridges, much less the majestic wilderness that is allegedly there in the first place. This would all be quite quaint and charming in its own way, and after all, if you don't find a place in politics for these sort of people, where would they go?

Unfortunately, lately politicians seem to have developed taste and culture; and now, instead of getting excited about slabs of concrete or chunks of asphalt, they are developing an alarming amount of enthusiasm for paying excessive amounts of money for art. Not their own art, of course, and nor is it their own money, naturally: that would encourage unnecessary feelings of frugality and thriftiness, which are highly disadvantageous to a political career.

And what sort of art do they like to spend excessive amounts of money on, these people who previously exercised their talents in spending excessive amounts of money on slabs of concrete and chunks of asphalt? Huge art, horrible art, art both hugely horrible and horribly huge so that you can't help but notice it being horribly huge wherever you turn. Oh look, it's a gigantic fucking silver gnome. Oh yeah, there's that arse ugly fake hotel. How about that! And what is most infuriating about all of this is not the expense, or the ugliness, or the cheap attention-grabbing nature of it all, or even the hugeness, it is the inescapable impression that one is being imposed upon, that your own artistic tastes don't matter, that it has all been settled and decided for you by people with more - well, not more taste than your own, certainly, and not necessarily more intelligence than you, either, but certainly more money than you. Oh, they've got bucketloads of that last one. And look, here's some culture, so you don't have to worry about it. There you go, you slobs, have as much culture as you can take!

It is all of a piece with that other common view about people who inhabit the suburbs, that they are an undiscerning mass who generally will do everything they can to avoid culture. But that was never true, not really, since every occasion a person in the suburbs spends not going out to a night in the theatre or visiting the local art gallery or looking fashionable in the company of other fashionable people on Brunswick Street or Sydney Road, they might just be spending quietly at home reading a book or watching the telly or having a party with friends. But no, the assumption seems to be that these people must have culture, the right sort of culture, whether they like it or not, and, oh look, there's another vomit-coloured and turd-shaped statue of Brobdingnagian proportions being erected in the oval behind your house, obstructing your view, grabbing your attention, just when you thought they really were going to let you get away with standing around idly in the backyard admiring clouds.... Will anyone save us from this sudden discovery of taste and culture on the part of politicians?

Thanks to a rather surprising coincidence of events and happenstance, I recently, in the course of two days, came into the possession of three (or possibly four*) student journals from two separate universities (Melbourne and La Trobe). As you may know, I am frequently in the habit of reading such literature in my ongoing quest for more things to be grumpy about, so I eagerly leapt upon these latest publications.

The results were lamentably free of poor writing, reprehensibly well written; barely a howler here or a mistake there to get outraged about. I was thrown into such desperate straits that The Grump had almost decided to get grumpy about a lack of things to get grumpy about (it's been known to happen before). It was only at the last minute that I was saved from this by noticing the apparently ubiquitous label above articles: "Trigger warning" - often substituting any actual introduction or editorial note. "Trigger warnings" were common to both publications from Melbourne and La Trobe. suggesting that it's not only in these two publications that one might find such stuff.

It is curious to observe how infantile trends that seem to begin in student culture in the United States make their way rapidly to Australia. Just why we should feel compelled to imitate this latest catchphrase (there've been a few come and go since I was at uni) is beyond me. Australian students, take a stand, be patriotic - let us independently come up with our own twaddle, free of this American nonsense! Trust me, I'm a grump!

*There is a certain amount of quantum uncertainty about such things in my universe.
Posted by TimT at 9:27 am 1 comment:
Email ThisBlogThis!Share to TwitterShare to FacebookShare to Pinterest

Notes towards a doughnut re-education camp

Monday
- Geometry: the holes in doughnuts - ideal dimensions of - taste compared to holes in Cheezels - advanced geometry - whether you can fit a camel through - Mobius doughnuts.

Tuesday
- The inferiority of Krispy Kreme and Woolworths doughnuts - being fed boxes of said doughnuts while tied down in a chair and Beethoven's ninth is played to you repeatedly.

Wednesday
- The Sisyphus test - can you roll a gigantic doughnuts up a hill before eating it? - catching doughnuts in your mouth.

Friday
- variants - Cheezels: savoury doughnuts or chips? - what to do with Spanish doughnuts - ideal heat of doughnut - various taste testings.

Sunday
- more taste testings just to be sure.
Posted by TimT at 9:10 pm 1 comment:
Email ThisBlogThis!Share to TwitterShare to FacebookShare to Pinterest

Because food is evil and must be punished

Doctors' kitchen knives ban call
A&E doctors are calling for a ban on long pointed kitchen knives to reduce deaths from stabbing. A team from West Middlesex University Hospital said violent crime is on the increase - and kitchen knives are used in as many as half of all stabbings...The researchers said there was no reason for long pointed knives to be publicly available at all.
They consulted 10 top chefs from around the UK, and found such knives have little practical value in the kitchen. 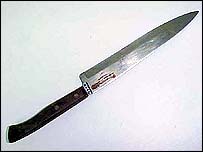 Put down the knife, sir, and step slowly away from the onion


I know this article is a decade old, but the pursuit of truth and outrage and scandal is timeless. So, in the spirit of freedom and all things good and pure, I'd like to take a nostalgic look back at all the other items the nanny state (accursed be its putrid ways!) has banned us from using in the kitchen.

Howitzers
Gone are the days when you could just rocket blast a piece of steak or a delicate bit of blanc monge into submission. Sure, there are egg beaters and such like, but the results are just not the same without that beautiful smell of metal and military explosives, are they? 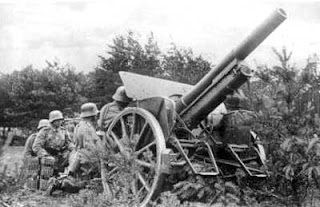 No no, boys, the souffle is that way!
Thanks, nanny state!

Demonic-slaying axe
There once was a time when you could cheerfully spend a hard day's work spifflicating demons on your sturdy axe before returning home and hewing some honest lumps of bread off with the same axe to have yourself a soothing peanut butter sandwich. Not any more. "Demonic-slaying axes should only be used by approved and licensed slaying authorities", they say. I ask you. Where are we going to find someone like that when we want a sandwich? 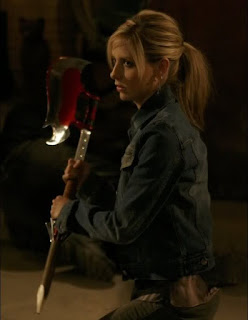 "Make me a sandwich! Please?"

And sure, the bench would usually get hewn into splinters when you did cut another chunk of bread, but it was worth it!

Medieval mace
Oh, I can't even prepare the salad dressing with a medieval mace anymore, can I? This is just too much! Actually, I kind of agree with this one: it's much to difficult to whip a mayonnaise into shape with a medieval ball-and-chain concoction: the Luger is so much more efficient for the modern chef. 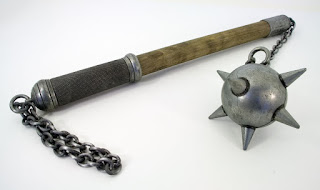 What do you prefer? This traditional kitchen implement or the more modern-style Luger? Write in, please, enclosing  a cheque for $1 million to the usual address!

Grey clouds and mizzle -
An appropriately sober
Dose of springtime drizzle
I hope lasts through October.

Enough that bees and flowers
Enjoy their youthful fling -
But without springtime showers,
They will not bear a thing.

We'll have more weeks of boggy
Sodden gloom to trudge through yet:
So thank God for the soggy
And for the rain and wet.

Why join Twitter when you can do it in the more traditional manner?

"You've had a sex change?" said one of them. "That's alright, a lot of us have. You see Mike Hunt over there?"

Of course, I had to look. I find Mike Hunt in the strangest of places. Anyway, things were going along like this for a while, when who should come around the corner but Laura Norder?

"Laura!" we all said. "Long time no see! We haven't done anything, honest!"

"There's no time for that now!" said Laura. "I'm looking for Wayne Kerr - he's pretty big, you know. Looking for a big, gigantic, large Wayne Kerr. You seen him?"

"Is he with Mr Bates?" someone suggested.

Just then, I heard a Russell in the trees. I don't know why, it's just that Russell is always climbing the fucking things. "Get out of the bloody tree, Russell!" I shouted.

"Fuck you!" said Russell, which is just like him.

Laura explained, turned out Wayne had been a Robin up and down the neighbourhood. He drove Alexis round the bend, and then got involved in a big con job stealing people's credit card details.