Spray it, don't say it

GRAPHIC artist _____ has been charged by police after she allegedly spat on Richard Pearson, administrator of the newly formed Inner West Council, at a fractious first meeting on Tuesday night. - The Daily Telegraph

She felt her hatred churning, roiling,
Deep within a burning, boiling,
Longed to make a final soiling
To The Oppressor's face -
From stomach, chest, and nose and lung
She dredged a booger up among
Her uvula and teeth and tongue -
A deep, dark, bitter taste -

This precious jewel of salt and spite,
Of rancour, fury, bile and blight,
With which she would her target smite -
She gave a secret smile -
And when his face hove into view,
Her lips flung forth the fatal brew,
Across the seething air it flew -
As straight as a missile,

Then broke apart, this mucal matter,
With a most unseemly splatter,
The droplets all went pitter-patter,
Emblems of her rage -
A perfect work of form and function,
Snot and spray and cough and luncheon,
A Jackson Pollock in high dudgeon -
Next day's headlines. Front page.

I have thought long and deeply about feminism, as you all know, and here is a list of feminist things.

The Womandelbrot set.
Womanta rays.
The Communist Womanifesto.
Womanfred, a play by Byron.
Womansplanation. It's a bit like mansplanation but a good thing.
Womanspreading.
Femme dashes.
Femminem, the rapper.
She Guevara. 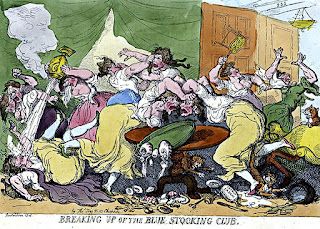 Because we can never have too many television programs featuring dogs

Please tell me why we don't have this show on the television already? 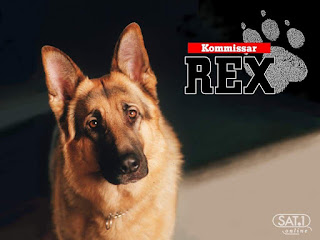 (SCENE: An ordinary hospital. Or is it? Yes. It is. There is a SECRETARY sitting at a desk. A DOCTOR enters. )

DOCTOR: Have you filled out those forms, Secretary?

SECRETARY: I certainly have, Doctor. For, as we all know, the most important part of modern medicine is appropriate administrative record keeping in the context of adequate departmental oversight.

DOCTOR: And we never know when....

DEPUTY ASSISTANT HOSPITAL INSPECTOR REX jumps in through the window, shattering it, and stands there while the opening credits run).

DOCTOR:.... Deputy Assistant Hospital Inspector Rex comes WHY DO YOU ALWAYS COME IN LIKE THAT!

SECRETARY: I didn't even know we had a window.

SECRETARY: He's right, Doctor! There's no time for that when there's administration to be done! (Plonks several realms of paper on floor in front of Deputy Assistant blah blah etc etc). Here are the files, Deputy Assistant Hospital Inspector Rex!

DOCTOR: Why, thank you, Sir.

OLD LADY: Help! Help! A criminal has taken my purse, but he's terribly afraid of dogs! If you could onl....

TUNE IN NEXT WEEK FOR MORE EXCITING ADVENTURES OF DEPUTY ASSISTANT HOSPITAL INSPECTOR REX!
Posted by TimT at 6:32 pm 1 comment:
Email ThisBlogThis!Share to TwitterShare to FacebookShare to Pinterest

Some may be more real than others

Ideas for workshops in Kyneton. Some may be more real than others.

How to run a national culture - an A to Z

Devastating day of reckoning for Australian arts as 62 organisations miss out on crucial operational funding.

Australian artists have faced many desperate moments over the past three years, particularly in the last 12 months following the 2015/16 Federal Budget announcement last May, which revealed devastating cuts to the funds distributed by the Australia Council. However, Friday the 13th of May 2016 is now a day that will be remembered in infamy by many as one of the blackest in Australia’s artistic history. Published this morning, the Australia Council have announced the list of 128 fortunate recipients of the highly sought after four-year funding grants. However, many unsuccessful applicants, including 62 organisations previously funded by the Australia Council, are now facing uncertain futures as their operational costs are no longer underwritten.

A - artists, the people who make art. They are the most important people of all. A also stands for audiences, but no-one gives a shit about them.

B - bureaucrats, who deliver money to the artists. Everyone loves bureaucrats! Until....

C - cuts to funding happen periodically, but only when evil Coalition governments are in power.

D - despair. It's natural to feel disappointed when your funding source has been cut, but artists, being more important than other people, have much more important feelings: hence, despair.

F - fighting amongst themselves, a fun practice which artists indulge in in these economically-straightened times when they discover their artist friends have got money but they haven't.

F - forms, which artists have to fill out a lot of if they want to have a chance to get funding.

G - gloom, a side-effect of despair (see above).

H - horror, another side effect of despair (see above).

I - independent, something that all artistic organisations lay claim to. Some have been independent for several decades, although strangely independence is only ever possible by being dependent on government for money.

I - institution, icon - things which every artistic group is, especially when its funding is in danger.

J - jobs, jobs, jobs. What some artists lose in the cuts to funding.

K - knitting jumpers for lamp-posts, one of the many important works of art which has previously attracted funding.

L - latte, the traditional food stuff of the artist.

M - minorities, groups which artists often discover they are members of when they are filling out forms.

O - opera, something some artists love, most artists complain about, but very few go to. It is usually unaffected by the funding cuts.

P - protests, which at some point someone will organise.

P - paradigms, things that artists shift a lot in their artistic works. No-one has seen a paradigm in the wild, so no-one is quite sure what they look like.

P - politicians, who are ultimately responsible for all the funding.

Q - questions raised, something that important art does, although presumably, it does somewhat less of it now because of the cuts to funding.

R - regions, places which artists care about a lot, although they seldom visit them unless there's funding involved.

S - schmoozing, a helpful thing to do when applying for funding, and which makes it all the more annoying when that funding gets cut.

T - taxpayers, the people who make money, only to have some of it taken off them by politicians with a variety of dubious justifications and spent on art that they don't necessarily want anyway.

U - unemployment, the unfortunate side effect of funding cuts (and of running an artistic organisation for decades without somehow preparing yourself for the day when the funding gets cut).

U - urban areas, the exciting places artists like to hang about in.

V - voluntary support of the arts, a ridiculous thing that artists rightly dismiss, because who wants to make art that people want to pay money to see?

X - xenophobia, what artists are fighting against. They're not sure how to link it to the present politicians and the cuts to funding, but they will find a way.

Y - yartz, the - term of contempt for, or endearment with, the arts, depending on whether you are an artist or a lowly taxpayer.

Z - Zzzz, the instinctive response of many non-artists when they see these arguments.
Posted by TimT at 2:20 pm 1 comment:
Email ThisBlogThis!Share to TwitterShare to FacebookShare to Pinterest

queery - an inquiry by a queer person

hgkpfvq - no idea what it means, but that one time it would have been really useful if this was an acceptable bingo.
Posted by TimT at 4:56 pm 1 comment:
Email ThisBlogThis!Share to TwitterShare to FacebookShare to Pinterest

Font of all wisdom

The ABC is designing its very own font...

TO: All ABC staff
RE: New font.

... To reflect the changing and diverse nature of Australia's multicultural society, there will not only be an 'Italic' option in this font, there will also be options ranging from Asiatic to Islamic.

Old hegemonic modes of class discourse are outdated, and to embody this, there will be no 'upper-case' and 'lower-case' (upper caste and lower caste, much?). It will all be lower case.

Likewise, 'bold' will no longer be required, as this strikes an unnecessarily aggressive patronymic note, but this will be replaced with a groundbreaking 'gay pride' option.

Some savings will have to be made, as the ABC font will be run on an economically-collectivist basis, and until the establishment at long-last of a worldwide communist utopia, neoliberal capitalism will create shortages. Redistribution of materials will be necessary: ellipsises can be made out of full stops gathered from previous sentences,  or, if necessary, colons which have been inverted in the technical department.

The needlessly phallic hyphen and the positively priapic exclamation mark will be replaced by more gentle yonic symbols of global motherness. Ampersands for all!

Thank you for helping us in the formation of this bold - sorry, proud - new font, and we look forward to rolling the first letters out of our workshop shortly! 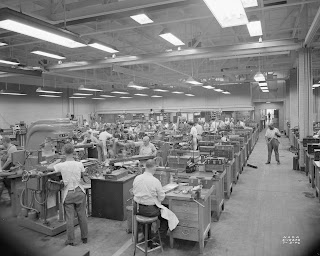 ABC staff hard at work in the font workshop.