Picking up on the theme of a previous post, here's an underexaggeration rap!

Yo look at me I'm a bigarsemothafucka
I'm bigger than a subatomic particle sucker -
I am wider than neutrinos I am taller than a quark
More light comes from me than a black cat in the dark!
Yo yo I'm really something I'm more real than a zero -
Not just some something something, I'm a real something hero -
I am smarter than a feather I am faster than a rock
I have more ironic subtlety than a case of electric shock -
I am much more left than right I am much more right than wrong
And I'm super-duper long - like I'm longer than this song.
Posted by TimT at 2:18 pm No comments:
Email ThisBlogThis!Share to TwitterShare to FacebookShare to Pinterest

Let's get hygge with Kierkegaard!

Chuck a couple of pillows on the sofa, light the beeswax candles, and put a four-voiced whale song fugue on the CD player, folks - it's time to get cosy with Kierkegaard, the original exponent of the wonderful Danish concept of hygge!

"If, in the immediately succeeding generation, there lived a person who, with the power and passion of an absolute ruler, had decided to concern himself with nothing other than to get to the truth on this point, would he thus become a disciple? Assume he seized all the contemporary witnesses and those who were closest to them, who were still living, had each independently interrogated as thoroughly as possible, shut them all up like the seventy interpreters, starved them as a means of getting them to tell the truth, cunningly confronted them with one another, simply to ensure in every way possible the most reliable account - would such a person, with the help of this account, be a disciple? Would not the god rather smile at him, that he wished in this way to procure for himself what can neither be bought for money, nor seized by force?"- Philosophical Crumbs

Ahhh, so comforting. It's like a little bed-cap for the soul.

"Anxiety and nothing always correspond to each other. As soon as the actuality of freedom and of spirit is posited, anxiety is canceled. But what then does the nothing of anxiety signify more particularly in paganism. This is fate. Fate is a relation to spirit as external. It is the relation between spirit and something else that is not spirit and to which fate nevertheless stands in a spiritual relation. Fate may also signify exactly the opposite, because it is the unity of necessity and accidental. … A necessity that is not conscious of itself is eo ipso the accidental in relation to the next moment. Fate, then, is the nothing of anxiety." - The Concept of Anxiety

That was soothing, too, wasn't it? Let's allow ourselves to be soothed a little more.

"How dreadful boredom is — how dreadfully boring; I know no stronger expression, no truer one, for like is recognized only by like… I lie prostrate, inert; the only thing I see is emptiness, the only thing I live on is emptiness, the only thing I move in is emptiness. I do not even suffer pain… Pain itself has lost its refreshment for me. If I were offered all the glories of the world or all the torments of the world, one would move me no more than the other; I would not turn over to the other side either to attain or to avoid. I am dying death. And what could divert me? Well, if I managed to see a faithfulness that withstood every ordeal, an enthusiasm that endured everything, a faith that moved mountains; if I were to become aware of an idea that joined the finite and the infinite." - Either/Or

Wasn't that nice? Sometimes it's just nice to be reminded of niceness. It's the little things, you know?

"When the child has grown and is to be weaned the mother virginally covers her breast, so the child no more has a mother. Lucky the child that lost its mother in no other way!" - Fear and Trembling.

Awwww, and so with those confusing, confounding, but oh-so-comforting words we leave old Kierkegaard for now. 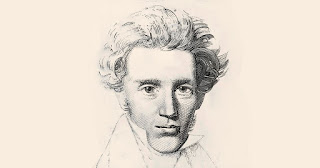 Posted by TimT at 9:50 am No comments:
Email ThisBlogThis!Share to TwitterShare to FacebookShare to Pinterest

Well, we've all heard of over-exaggerations, haven't we? But what about under-exaggeration? It's a little explored artistic technique, if you ask me. Let's see. We'll try out a few:

The Relatively-large Pyramid of Cheops.

A modest statue of a blue wren on Mt Rushmore.

Lips as red as under-ripe cherries.

I'm so hungry I could eat a horse-shaped biscuit!

Energizer battery - it just keeps going and going and then stops.

Making a bigger hill out of a molehill.

The All-right Wall of China.
Posted by TimT at 8:02 pm 1 comment:
Email ThisBlogThis!Share to TwitterShare to FacebookShare to Pinterest

Gross out memes for wholesome people

This one's for you, translation software

UPDATE! - It's not even trying! 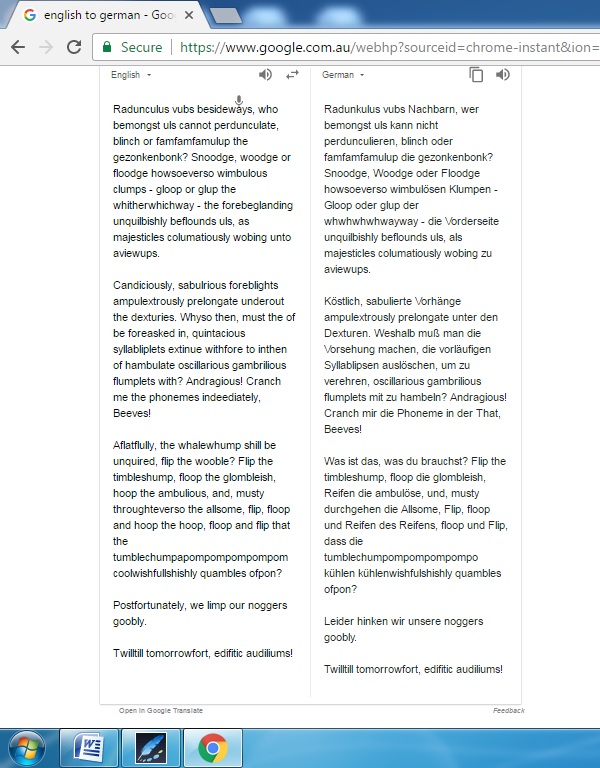 One of the nice things about being a grump is the many wonderful and pleasing words you get to throw around. 'Lollygagger', 'preposterous', 'cankerous', 'limp', 'lack-witted', 'loathsome'. The words just roll off your tongue. The contemplative grump can while away his or her time sifting through the many fine distinctions in meaning in an expression as simple as 'ugh' - depending on how, exactly, it is pronounced, it can express anything from apathy through to utter abhorrence; all meaning something slightly different, yet all expressive of a certain manner and mode of grumpitude. The following alphabet is necessarily incomplete; many letters suggested numerous words; for a more full range of expression I have ventured to encompass adjective, verb, noun, and at least one Shakespearean insult. Feel free to add to it to give vent to your own inner grump.

My job application to the Illuminati

The Illuminati have a webpage, and about time too! It's just ridiculous in this modern day and age that between them and the Reptilian blue bloods they haven't been able to rustle up a little blog or twitter outreach account to keep us updated on their plans for world domination. Anyway, I've just sent them in a job application.

Citizens of the Illuminati, I send you hateful beatings hearty greetings! I recognise your organisation as supreme superior, a truly horrific terrifying terrific group of people! Absolutely world eaters beaters! Nobody beats the world better than you!

I write to you now seeking domination nomination over of to your society, and shortly look forward to offering myself as a tyrannic leader terrific leader to the world! In working to do my bidding together, we can subject subjugate exterminate expect  the world to shortly come to deliver all due praise glory honour abject grovelling acts of meek obeisance plaudits to I me myself us.

My feelings at the moment are predomination predominantly aggro eager; I am licking my lips lustful looking forward to working with you more, destructively desolatingly desirous to further the claws jaws spores cause of our organisation and thus order the world institute a new world order.

Soon, soon my fiends friends, we shall destroy the world enjoy the world's praise! I horribly happily anticipate making you my minions myself meeting you. Further, the war for global destruction I look forward to a fruitful discussion!

Fools! Fools! Soon  you shall all be mine! Yours sincerely, Tim Train
Posted by TimT at 8:56 am 1 comment:
Email ThisBlogThis!Share to TwitterShare to FacebookShare to Pinterest
Newer Posts Older Posts Home
Subscribe to: Posts (Atom)