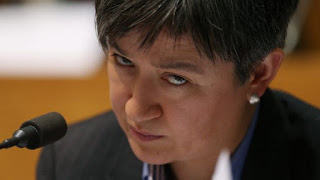 Why... why are you looking at me that way, Penny Wong? I.... I didn't mean to. But the mainstream media made me do it! No, no... really! Ayieeeeeeeeeeeeee!
Posted by TimT at 7:47 pm 3 comments:
Email ThisBlogThis!Share to TwitterShare to FacebookShare to Pinterest

Last week the exercise in German class was to sit and watch a video of a mountain and then come up with adjectives about it. The mountain was doing that thing it is that mountains do: not very much. In due course we had come up with a series of not particularly  original adjectives which the teacher was dutifully placing up on the board: "Hoch" ("high"), "neblig" ("misty"), "großartig" ("great, sublime").... at around this point I ventured: "Vielleicht es ist ein bisschen langweilig" ("Maybe it's a little boring").. The teacher laughed at this, said "Nein", and refused to write anything of the sort on the board: "Ja, langweilig", I cried, rallying to the course: "Es ist groß und grau und dreckig: langweilig!" (Big, grey, dirty).

And, come on, I was right: mountains are indisputably big, mostly a dull grey, and undeniably dirty: they are *literally* dirt. Big collections of rocks remain rocks, no matter how highly they may elevate themselves.

But people really do get over-excited about their big rocks. Just the other day the traditional owners of Uluru - that's the big red rock in the middle of  the desert, for anyone from other lands - decided to ban people from walking on top of their rock. Fair enough, it's their large stony object and they can do what they want with it, I guess. But the outrage! The anger! The cranky tweets and Facebook posts! Australians, it seems, really take their big rocks - and their right to walk over their big rocks - personally! What does it say over the state of a nation where one of their most beloved national icons is a gigantic rock in the middle of the desert? Mind you, we do have one over the United States. They get excited about a big hole in the middle of their desert.

What do people love about such masses of dirt, anyway? I suppose I shouldn't seem too dismissive of big rocks and hills and the like. Let's be exact and precise in our language here: a mountain is an exaggeration of dirt: there really is a lot of it. "A presence to glop at", as Auden wrote about that gigantic sphere of dirt and stuff in our sky. When Edmund Hillary learned of Everest, that gigantic collection of dirt in the Himalayas, his instinct was to climb it, too (this seems to be a common theme - getting on top of exaggerations of dirt, and then getting down to the other side). After he actually achieved this feat, one particular party - I'm not sure whether they were struck by a sudden fit of intelligence or a sudden fit of stupidity - asked Hillary why. Hillary's response was singularly unforthcoming: "Because it was there".

Mind you, when we were in New Zealand in February, Lexi and I took a trip by train to Chateau Tongariro, right up next to the famous Mt Ruapehu. There was a train packed full of people, with a viewing platform where everyone could see its sublime peaks and its noble vistas. All the way there and all the way back, our sight of the mountain was occluded by large swathings of clouds and mists and the like. None of us got to see this wonder of nature at all. It was great. I even got a poem out of it:

Ruapehu! So bigly and profound!
We've come to see your stately scenery!
Though swathed in mystic mists, down to the ground
You truly are a sight we'll never see.

I wrote ten more lines of this, but you see where I'm going.

Not that I really have anything against rocks. They're all right, I suppose. I just guess I get annoyed when the big ones detract attention from the other ones, really. Why does that mountain range get all the glory? What about this majestic pebble? This sublime range of grit? That glorious garden full of urbanite a couple of blocks away? Where's the tourist industry and travellers and sightseers and chalets and Almhütten for that, hey? No! I didn't think so!