In praise of grump

Anyway, it was all very awkward and embarrassing. She asked me in a stilted and purse-lipped fashion about things, and I found myself having to engage in polite conversation and meaningless chit chat. Though I may like to scowl and growl and harrumph occasionally, I wouldn't actually want people to be offended by it. But then, most people generally are misguided about the whole being grumpy thing, and act as if they had to be happy around other people all the time, and as if they truly thought that acting happy was actually the best way to stay happy. It really is strange.

Because being grumpy really can be quite wonderful. For starters, you get labelled with elegant and felicitious expressions like 'cantankerous', or 'irascible', or 'choleric', or just plain old 'surly'. If you keep it up for long enough, you become a 'grumpy old man', which for grumpy women is especially impressive*. And then there is a rich range of facial and verbal expressions; not just a uniform downturning of the face, but a veritable diapason of scowls and growls and glowers and lours and leers and sneers and harrumphs and flounces. I like to try several of these every day just to keep my grumpiness well exercised.

A few days ago I happened to be reading an article on a website that talked about Important World Affairs in a solemn and sombre voice.  The argument the article took was this: things are bad. The conclusion it came to was this: things are going to get worse. The tone the article took was this: there's nothing we can do about it. Once I finished reading this article, I clicked around on the website and started reading some of the other articles: their argument, conclusion and tone were exactly the same. About this point, I realised I had been reading for quite a while, and I was really rather enjoying it all.  The sense of gloom and grim resignation was quite heartening, and the pithy summation of world affairs one drew from the website - things are bad, things are going to get worse, and there's nothing we can do about it - had a pellucid beauty to it all. On the whole, I think this aphorism sums up the whole of Conservative and right-wing politics. And the whole of Progressive and left-wing politics as well, though the left does seem rather more fond of shouting and rioting and smashing the occasional window. It really is a cheering way to look at the world, if you are sensible and honest enough to give yourself over to grumpiness once in a while.

Besides, who really has the energy to even attempt to be happy all the time? Who settled on the competitive smile as the only acceptable expression in polite society? Being happy seems to be almost as exhausting and self-defeating as having fun, and we all know how bad that is. Sometimes, being grumpy really is nicer.

It was raining, at least. I suppose that was something.

*Viewers of the ABC or BBC may recall, a few years back, the twin series Grumpy Old Men and Grumpy Old Women. The latter, especially, apparently had difficulties garnering suitable quantities of guests, since they all objected to being called 'Old'. This seems to me to be a superb example of grumpiness at its best, and sets an example we can all emulate.
Posted by TimT at 9:56 pm 1 comment:
Email ThisBlogThis!Share to TwitterShare to FacebookShare to Pinterest

Question for the entire internet

If you had a room full of alpha males, with a smattering of beta males, the odd omega man and perhaps even one or two epsilon males and thetans, and you organised them all up in the right groups, do you think you'd be able to spell out the complete works of Aristophanes?
Posted by TimT at 9:04 pm 2 comments:
Email ThisBlogThis!Share to TwitterShare to FacebookShare to Pinterest

The sage of suburbia

The grace of Sydney Road: an 11 pm kebab.

What is the point of trains running on time? You can't rely on a service that is too reliable.

The wealth of Sydney Road: a 12 am baklava.

Never trust a brand name that has too many or too few capital letters.

The spices of suburbia: a 10 am Freddo.

Remember to throw out mobile recharge voucher only AFTER you have used it.

Prunes: the gourmand's laxative.
Posted by TimT at 12:10 pm 1 comment:
Email ThisBlogThis!Share to TwitterShare to FacebookShare to Pinterest

Do you know a shy Tory? Are you so shy about your own Tory leanings that you haven’t outed yourself yet? Mysteriously invisible to polls, this is a species that the left needs to learn to identify.

Shy Tory Song
Are they blushing in the bedroom?
Do they hide behind the door?
Do they harbour an opinion
On the undeserving poor?
What colour are their stockings?
Have they ever worn a boater?
Those unassuming non-presuming
Shy Tory voters.

Has a husband or a wife
Ever awkwardly confessed
That Mrs Thatcher's policies,
Though harsh, were for the best?
Does their bedroom conversation
Touch on economic quotas?
Those flirtatiously salaciously
Shy Tory voters.

Do they dream of Union Jacks?
Is it on their underwear?
Do they groan about the Whigs
In tones of deep despair?
Do they Telegraph their news,
Get their views from the Spectator?
Those tantalising self-disguising
Shy Tory voters. 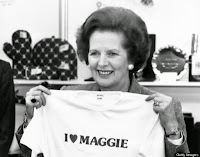 Apparently I have an occasional habit of writing literature in my dreams. As it happens, I had two dreams last night, and in the first, I wrote a play: Here it is, in full:

PERKINS: I want some words with you, Jenkins!

PERKINS: Those were the words!

PERKINS: Good day to you, sir!

In the second, I got told that a drama company wanted a one act play to put on tonight, and I got all excited because I remembered I had one lying around somewhere. At first I tried to write another one but couldn't, then I started searching through my papers for the play. And do you know what happened when I was just about to find it? As they say in the classics:

AND THEN I WOKE UP AND IT WAS ALL A DREAM.
Posted by TimT at 10:24 am 1 comment:
Email ThisBlogThis!Share to TwitterShare to FacebookShare to Pinterest

This poem is late.
But then, so is your present!
At least I called you.
Posted by TimT at 9:21 am 1 comment:
Email ThisBlogThis!Share to TwitterShare to FacebookShare to Pinterest

"I was going to do a brew today but the cat is on my lap.

I have no idea how I will overcome this seemingly insuperable difficulty.

I suppose I could put the cat off my lap, but if I did that, the terrorists will win."


Anyone else got a solution for Agnes here?

"I know how Agnes is feeling. Once I'd put on a 100 L pot of Heavy Scot's Ale on the stove for a final boil and then the cat hopped on my lap! Well, it boiled right down and then evaporated and still the cat didn't hop off. Eventually the house caught on fire, but kitty was purring so what could I do but scratch her behind the ears? Then she got angry at me and jumped off and coughed up a furball in the ashes of the kitchen, and you can imagine it was terrible to sweep up."


Thanks for that helpful tip, Doris. Keep writing in, brewers!
Posted by TimT at 8:43 am 3 comments:
Email ThisBlogThis!Share to TwitterShare to FacebookShare to Pinterest

Years and years ago (said the old man) I used to listen to Jazztrack on ABC Classic FM. Back then it was presented by an old codger with a smokey and laidback voice, kind of like a hippy 40 years after his time. His name, suitably, was Jim McLeod. I guess he got his voice that way by hanging around in the sort of nicotine-fragrant dives you heard jazz in, and presumably smoking a few himself. Voice may be a true mark of character, but cigarettes sure help.

Anyway, now I'm listening to the 3MBS jazz program. It's called The Colours of Jazz and it's presented by a young dude whose name escapes me at the moment. He has a voice that is laidback and kind of.... smokey. What? Is it Jim McLeod all over again?

They're not the only ones, because apparently the conspiracy is wider than that. Years ago I'd also occasionally listen to Adventures in Good Music, presented by a fellow with a voice like an old American uncle, Karl Haas. It was on ABC Classic FM, right in that time slot before Margaret Throsby and Clive Robertson were due to come on and start arguing with one another, if memory serves me correctly. Well, I think I've found this Karl Haas's doppleganger, too - an old American dude. Last name McLaughlin, first name Bill. Kind of sounds like someone's uncle. He presents a show on 3MBS called Exploring Music.  But of course; the titles Discovering Music and Music for Pleasure and so on were all used up, I suppose.

Huh? Is there some requirement that radio presenters of certain types of programs all have the same accents and characteristics? Does every jazz program have to be presented by laidback cool types with smokey voices? Do educational programs in classical music need to be fronted by avuncular American sorts who seem like they'd be just as happy delivering this talk at a piano lesson? Inquiring minds need to know. (Actually they don't).

PS the show's almost ended now and he says his name is something something Groves. Huh? That's not a very smokey name at all.
Posted by TimT at 9:57 pm 3 comments:
Email ThisBlogThis!Share to TwitterShare to FacebookShare to Pinterest
Newer Posts Older Posts Home
Subscribe to: Posts (Atom)