The little matter of matters that matter

Attention! Please pay attention to me. Good. Now let me try and get this straight.

The first person to answer the question over whether polls matter begins saying that polls don't matter, and polls don't matter so much because politicians listen to polls all the time, and the company the other two people work for then promote the news stories about the polls and the politicians listening to the polls which feeds into further polls which, being polls, don't matter. Then there is a little further stuff about polls not mattering because they matter (or maybe that they matter more than they matter, I'm not sure about this point) and then the other person responds.

Good! I'm glad that we got all that cleared up. Okay, now you can go back to watching kitten youtubes. Thank you for your time.

(Dips of the lid to Catallaxy for digging this up.)
Posted by TimT at 8:54 pm 1 comment:
Email ThisBlogThis!Share to TwitterShare to FacebookShare to Pinterest

Bend the round me sends
Really days these art
End the at start or
Start the at start?
Posted by TimT at 9:58 pm 1 comment:
Email ThisBlogThis!Share to TwitterShare to FacebookShare to Pinterest

There are times when life and music coincide, when the soundtrack to the non-existent movie that is your life seems so appropriate that you suspect it has been arranged that way. Slotting your car into the driveway, for instance, while Purcell's Trumpet Voluntary plays, or just settling down to listen to Handel's Arrival of the Queen of Sheba when a relative who you don't see much pops in the front door.

Another one of those unexpected life-music synchronicities occurred just then, when our chook Griselda leapt the barrier between the back door and the dining room, and triumphantly began pecking at the cat food, all to the strains of Igor Stravinsky's Augurs of Spring:

I particularly appreciated the way the cunning tootling in the bassoons and the oboes was mirrored by the way Griselda shiftily pootled around the dining room floor, thinking I wouldn't notice her. The ballet itself by Stravinsky is basically about someone getting sacrificed in order to propitiate the Gods of spring. Yep, I'm pretty sure Griselda would do that to me if she had half a chance....

UPDATE! -  Also from the Rite of Spring, this music is perfect for those times when the chooks eat. Plus, when a cat wees in the house just because, I'm pretty sure somewhere somehow this music begins playing...
Posted by TimT at 5:12 pm 4 comments:
Email ThisBlogThis!Share to TwitterShare to FacebookShare to Pinterest

Samantha Ronson's mother has revealed for the first time the struggles of having her daughter... - MX, Monday.

Random stuff from my notebook

Sprung has sprong, and the very grackles and bonnets do frolic and blithesome in the coots. Behold! For the sun sits soft on the budded leas, beaming and leering as if to say, Peek-a-boo! You're on the loo! For it is sprung, sprung, it is spronging, it shall sprang sprongishly, how merry and gay are we!

And before the sprong begins to simmer, perhaps it is time you asked yourself, is it time I got a new sprung? Just pip pip into Spruckets and Sprackets Galore for all the latest in fidgets and widdles, gribbles and groovers, driblets and drackets and more, at very affordable prices.

I was just in the kitchen drilling holes in my Swiss cheese, which I had planned to do prior to picking out the hundreds and thousands from the har with tweezers so I could sort them according to colour, and count them out, when what should pop up on my Facebook wall but the following message...

Season of sniffs and mild snuffliness,
Close-bosom friend of the maturing mould,
Conspiring with him how to load and bless
The wheezing windpipes with oncoming cold.

Her statement has come amidst concerns about rising levels of antidisunsexistnoncontrahomophobia and proantidisestablishmentarianclassism sweeping the nation.

May the talons of justice shred the honking beak of the itnerloper as a tractor blitzkreigs a bag of silken tofu.

But in a nice way.

The sable swan moves on

Soapmakers of the world, apparently not satisfied with tormenting children by providing a product that washes dirt off their bodies, and tormenting adults by charging them ever larger prices for ever smaller products, and tormenting me by crafting little cake-shaped things that are actually soap, have added a new evil to their list. Well, new to me, anyway. Soap made out of milk.

What is wrong with these people? Do they not have anything better to do with their lives than make soap out of milk, lovely milk, beautiful milk, milk that could be used for drinking or cooking or making yoghurt or cheese? It is true that there are two types of people in this world: clean people, and myself.  But why milk, of all substances? Why can't these clean people find a way to make soap out of broad beans? Or broccoli? Or tofu?

There is something perverse about a world that allows this sort of thing to go on. But perhaps, in the sake of mutual accord and cooperation, we can work out a little compromise: instead of making soap, all these people start making cheese instead. They lather themselves every evening with the cheese, hang it up to dry, and then crumble the cheese on their pizzas in the morning. Sounds good to me. Clean people get to stay clean, and gourmets get to enjoy the new and entrancing flavours in their daily cheese hit.

Alternatively, we could just hand out a regulation bar of Solvol to everyone when they go to take a bath, and stop playing silly buggers with all these milk supplies. Soap! Who ever wanted to make soap out of milk?
Posted by TimT at 9:15 pm 6 comments:
Email ThisBlogThis!Share to TwitterShare to FacebookShare to Pinterest

The Baron and I have been working our way through the complete Buffy box set. I'm surprised by both how much of it I've already seen and how much of it I've missed out on. A great show; the only way I can express my feelings about it is in free verse...

O Faith O Faith why are you so bad
For just because your Watcher got killed and you almost got killed by a vampire too and you lacked an authority figure and you started acting out and then you accidentally killed a man and then Angel chained you up and you decided to work for the Mayor instead that's no excuse
O Mayor O Mayor what can I say
Even though you sold your soul and became immortal and then performed dark magics and became invincible and turned into a giant scaly dragon and then had to be blown up with the rest of the High School you still had feelings
Why didn't you ever realise that there's more to life than politics just as there is more to politics than life
And just who the hell is Gavrok anyway
O Angel O Angel
O your pouty lips O Angel those sad eyes O I will always be here for you Angel O Angel you are so handsome O kiss me O no I forgot O Angel
For though you are a vampire who has been cursed with a soul and then you became evil and then good again but Buffy had to send you to a hell dimension then you came back and then you got poisoned and then you almost died until you drank her blood in a willing consentual way
Where did it all go wrong
O Xander when you saved the school from being blown up what was that guys name that tried to blow it up the guy that was already dead
I forget that bit
O Willow O Xander O Cordelia O Xander O Buffy O Angel O Willow O Xander O Willow O Xander O Giles O Joyce O Angel O Buffy O Willow O Xander O Cordelia O Angel O Buffy O Faith O Xander O Oz O Willow O No
O Buffy
You are a strong powerful affirmative role model for women everywhere
And you have mystical abilities granted to you by ancient sorcerors from time immemorial which leads to your tragic but wonderful adventures in Sunnydale on the Hellmouth
Is this covered in a chapter of Germaine Greer do you know
O Anya
That time when you tried to bring your demon powers back
And you bought Evil Willow into our world
You really buggered up that time didn't you
O Amy
I want you to know I really respect you both as a woman and as a rat
O Evil Willow
Just how did you get to be that way anyway
O yeah you were in an alternative dimension
But crime doesn't pay
O kindly professor guy in a bow tie
Whose name I forget
It was your sad fate to be the discoverer of a plot device which proved instrumental in the unfolding drama of the final episode which meant unfortunately that you were killed early in the proceedings and I felt really sorry for you
Even though I forget your name
Why?
That goes for you too
O Joss Whedon
Why?
Why?
Whhhhhhhhhhhhhhhy?

Posted by TimT at 4:30 pm 4 comments:
Email ThisBlogThis!Share to TwitterShare to FacebookShare to Pinterest

I shall be marketing my wares at the Melbourne Town Hall this afternoon from 12-5, not to mention my zines. It's all part of the Sticky Zine Fair. If you're in town, please pop in and say hello. I'll be the chap sitting somewhere in the hall with my beard and Richmond tie. (Excitingly, I have just mastered a tie knot called 'The Pratt', so please feel free to admire if you do come around.)
Posted by TimT at 10:32 am 1 comment:
Email ThisBlogThis!Share to TwitterShare to FacebookShare to Pinterest 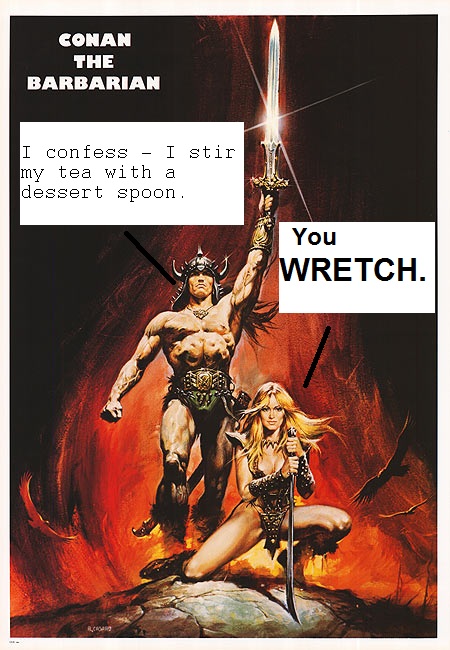 Posted by TimT at 7:25 am 4 comments:
Email ThisBlogThis!Share to TwitterShare to FacebookShare to Pinterest

The subject for today is Australian Rules, which I know bugger all about and which confuses me greatly. A perfect topic for comment on this blog, then, which specialises in such matters.

My team the Tigers have been ambling their way through the doldrums for the past thirty plus years, neither being particularly successful nor particularly noticeable. They have an especially grumpy coach, Damien Hardwick, 'Dimma', whose facial expressions seem to reflect this, veering between the disappointed frown to the grouchy glower. It is true, sometimes the habitual contours of his face are reversed, and you get weird phenomena which you might call inverted frowns, or retrograde scowls. But sometimes the effort is all too hard and his face seems to become confused at the effort.

He was born like this, I think, with his face naturally relaxing into the features soulful melancholy, or outright crankiness; the worried furrows of his brow must have come in at an early stage.

Personally, I think happiness and the facial expressions that come with it is a bit overrated - as you will have probably deduced from my previous post. So I find the many and varied grouchinesses of Dimma quite life-affirming, really. It is a pleasure to be reminded of his displeasure. Well, just a bit, anyway. Can he take our team all the way to winning the grand final this year? I might just as well ask the chickens what are the implications of Einstein's theory of relativity in the light of modern string theory. If he does, though, heaven knows what it'll do to his face - the effort in all those retrograde scowls and inverted frowns might be all too much. But one might say he would not be greatly undispleased. Not greatly undispleased at all....
Posted by TimT at 8:38 am 1 comment:
Email ThisBlogThis!Share to TwitterShare to FacebookShare to Pinterest

On first looking into the celebrity pages