Beer tastings are weird. Grown men nod sagely over tiny glasses and agree that butterscotch is bad, honey is bad, green apple and red apple is bad, but burnt-rubber-sulfur is wonderful.
Posted by TimT at 10:01 am No comments:
Email ThisBlogThis!Share to TwitterShare to FacebookShare to Pinterest

You want to know what I'm thinking about? (And if you don't want to know, you should want to want to know). Tardigrade sex, that's what! What's that all about? How on earth do tardigrades - infinitesimally small creatures - find one another to begin with? Because humans suffer from the same inclination from time to time, they built towns and cities so that we know where everyone is, but tardigrades hardly have the good sense to do that. It's not like they even have proper brains. Basically, it's like one needle in the haystack going in search of another needle in the haystack - and finding it. What?

And then! When they actually happen upon another! What on earth possesses the tardigrade to actually carry out its tardigradular duties? "Tardigrades are oviparous", reassures Wikipedia, "and fertilization is usually external." Okay then, that's not so bad, but... "A few species have internal fertilization, with mating occurring before the female fully sheds her cuticle." So they do have sex after all! But surely at this point, the sex-crazed tardigrade would rightly think, "Ew! It's a small wriggly buggly thing! I'm not going near that!" I mean, just look at them! 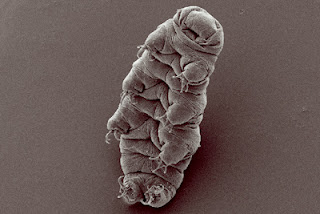 Stubby little ridiculous thing with legs splodged out on either side of them! I have no idea what gets into tardigrades' minds to make them think it's actually okay. (True, they don't actually have minds. But that's no excuse.)

LADY:We're ringing to talk about your gaffe supply.

TIM: Gaffe? I make them all the time.

TIM: Really? Surely everyone makes it.

LADY: So anyway, we're ringing to ask about your gaffe line.

TIM: Gaffe line? A line delivering gaffes to our property? What are you talking about?

(I can see the gaffe in my minds eye at this point, running along the pipe, a greyly rubbery flubbery substance, coming out a gaffe tap).

BARON: I think they're talking about gas.

TIM: OH! (Pause) (To lady on phone) Are you talking about gas?

Well.... that was something of a gaffe.
Posted by TimT at 3:29 pm No comments:
Email ThisBlogThis!Share to TwitterShare to FacebookShare to Pinterest

Irregardless of my critics

'Irregardless' is, too all intensive purposes, a misunderestimated word. There are currently many such words and phrases in our English tongue today, so that even those who are disinterested in learning, English sin taxes, and grandmas, may wish to pay a tension to them. They are literally the building blocks that form the inexorable march forward into progress of our language, so much more so than the stale old formalities that have tied us all back behind our class on the ladder for so long. Besides, what is language for if not for mutual communicants or repression of ideas? Nothing, or maybe even very little, let me tell you! So let us not worry anymore about subjecting our words to objectification, or objecting to their subjugation in accusative cases of law, for all these old rules are getting quite dative.  And so, without further, adieu.
Posted by TimT at 2:11 pm No comments:
Email ThisBlogThis!Share to TwitterShare to FacebookShare to Pinterest

The Mormons  are coming along the street
With a bite for every dog to eat
And a sheaf of wheat for your pet galah
The Mormons are coming hoorah!

The trees all applaud with a welcoming breeze
The flowers all buzz with the greeting of bees
For they've come from afar from the land of Utah
The Mormons are coming hoorah!

They're greeting the stray cats with sweet salutations
They're reading the sparrows the news of salvation
There is jubilant honking from every car
The Mormons are coming hoorah hoorah
The Mormons are coming hoorah!
Posted by TimT at 11:38 am No comments:
Email ThisBlogThis!Share to TwitterShare to FacebookShare to Pinterest
Newer Posts Older Posts Home
Subscribe to: Posts (Atom)