Want to unlock that sensuous potential and enter the wild technological vortex of the future? Yes? I'll tell you anyway.

Get a cat. Any cat will do. Cats have a natural affinity with computers: they sit on them a lot. You wouldn't sit on something you didn't have an affinity to, would you? One of our cats, Beatrice, sat on my computer this morning, and within mere seconds had opened up a window that I hadn't wanted opened, to a website that I wasn't particularly interested in, containing a subject that I didn't bother reading about, opened up a sidebar that I had no idea about to the window that I was already working in, and concluded the proceedings by bringing up another little window asking me what I'd like to save (though I hadn't done anything worth saving anyway). And then, to conclude proceedings even more, just... kind of... stayed sitting there while I patted her.

Alternatively, throw out your computer and just get a cat. It makes things much easier. 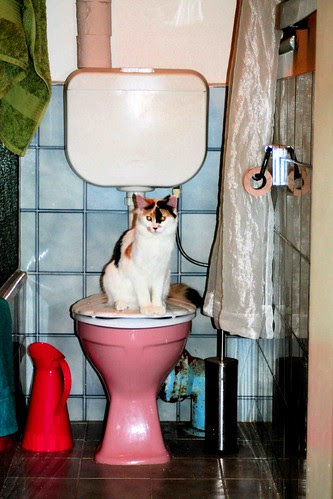 Beatrice, thankfully not unlocking the throbbing sensuous potential of the toilet.
*They've got to be impressive if you don't know about them.**

** I don't know if that's a compliment or not, it was meant to be.
Posted by TimT at 7:29 pm
Email ThisBlogThis!Share to TwitterShare to FacebookShare to Pinterest

That's a damn fine cat you've got there

With excellent skills in sitting on or in things, especially toilets, computers, and boxes. On the whole I find her most commendable.

Beatrice sits on the pan,
knowing a LAN from a WAN.

Refusing to pander,
or leave any dander,
she merely applies her elan.

A limerick's had many fans
In the world since it first began:
But none could be finer
Than a simple five-liner
Penned by Ms O Dyne (first name Anne.)

ï»?It is a popular way of showing support and also to show which team you are currently a fan of Men's outfits are designed differently from ladies
ï»?Your professional poker coaches might decide the different methods of teaches these participants distinct means of swapping partners your bat Nevertheless[url=http://www.authenticnikecoltsjersey.com/colts_andrew_luck_jersey_nike-c-9_21.html]Womens Andrew Luck Pink Jersey[/url]
when the prospective client of searching for and purchasing an additional mattress arranged is actually daunting[url=http://www.authenticnikecoltsjersey.com/colts_andrew_luck_jersey_nike-c-9_21.html]Womens Andrew Luck Pink Jersey[/url]
it's possible for the crafty grownup to create a kids sports activities bedding with odds and ends that could be also throughout the house

On behalf of A ODyne, who is aggravated by getting those 15 spam comments at our inbox, we came back here to see WTF was going on, and at least had the pleasure of your limericky response.

The icky responses, we could do without. a big purr to hard-to-beat-Beatrice