There is a meme that's been going around facebook for a few years: a picture of a goat with the caption 'share this goat for no reason'. It just illustrates the depravity and perversity of the facebook generation. Goats need no reason. Goats are their own reason. Why even bother suggesting that you should share a goat for no reason in order to come up with a reason to share the goat? Just share the bloody goat. We all need more goats in our lives: there ought to be no explanation or reason or non-reason reason given. I have seen a reason, and it is goat.

The proliferation of giraffe pictures is a fine thing, a noble thing, a sign of the advancement of civilisation and the progress of the humanities and science. But there need be no excuse for the giraffe; rather, we should all make it our own responsibility to independently muse on the wonder and majesty of giraffes by sharing a giraffe picture of our own free will. That is the glory of liberty: being able to post a picture of a giraffe whenever you like. 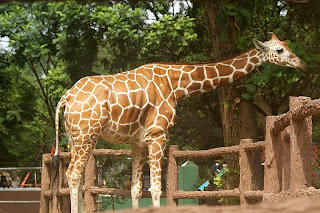 You're welcome.
Posted by TimT at 11:34 am
Email ThisBlogThis!Share to TwitterShare to FacebookShare to Pinterest