Yesterday it was off with the cats to the place with the nice lady who smiled and stuck metal things in their behinds when they were not looking.

You wouldn't think she'd enjoy it all that much, sticking metal things in the behinds of cats when they're not looking. But apparently she stays there at that place all day and does it. You'd think, indeed, that the nice lady who smiled would rather set some appointments with cats just to roam around the place and eat a few treats. Then she'd be the nice lady who played games and gave treats and smiled and stuck metal things up the cats behinds. No, apparently not.

The cats reacted to this whole experience quite diplomatically, growling and slashing their claws about quite furiously, in the manner of cats who had just had metal things stuck up their behinds, which, as you'll recall, they were.

It makes you wonder, doesn't it. What's it all about?

Anyway, since then they have been recovering from the whole traumatic experience by curling up in a ball and sleeping. They were barely even interested in outside time. 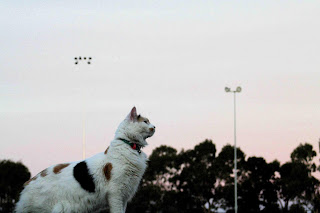 Here is a picture of Bea in happier times on the weekend, celebrating the victory of the Richmond Tigers by posing dramatically in front of some goals.
Posted by TimT at 8:29 am
Email ThisBlogThis!Share to TwitterShare to FacebookShare to Pinterest

That is indeed a very dramatic pose. Bea looks majestic.

Is it me, or doe Bea look very white like an albino tiger? Onto other things, you could one day call her Princess Beatrice and put a uterine shaped headdress on her head and loan her out to weddings.

Excellent suggestion! Beatrice would make a wonderful wedding cat. Core responsibilites would include: pouncing on the bridal train, hiding under the wedding seats, festive lap sitting, and celebratory catching of any moths who happen to be in attendance.