Saw Sweeney Todd on the weekend. 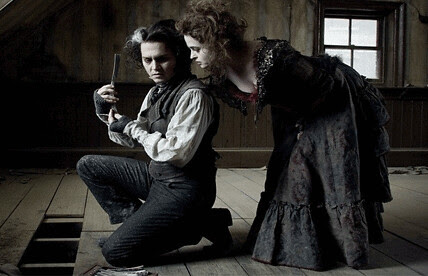 The film contains ten scowls, four glowers, seven leers, fourteen grimaces, and numerous sneers; there's rancid fog, rivers of blood, a hellish below-ground furnace, a number of charnel scenes, and - worst of all - Broadway showtunes. The art and set design and costumes and look is fabulous, but the general tone is black. (Not entirely true: some of the characters have their grey moments, too).

The typical scene goes something like this: Sweeney Todd philosophically sings a mournful little song under a black sky while cheerlessly slitting the throat of his latest, understandably dour-faced, customer, perhaps reflecting gloomfully upon the wicked state of the world.

Apart from that, it's all a bit of a downer.

In unrelated news, my hair's getting a bit long, but I'm thinking twice about having a haircut...
Posted by TimT at 9:55 pm
Email ThisBlogThis!Share to TwitterShare to FacebookShare to Pinterest

Yes, but does it have a happy ending that leaves you singing and dancing out of the cinema?

You confirm my suspicion that I should not see this film.

Steve, you will be happy to know that this film has received the unanimous endorsement of enthusiastic pessimists and masochists the world over!

A bit Sweeney Agonistes, no?

But you really must be more specific! Is it worth my paying full price or should I wait for tight-arse Tuesday? You Victorians do have that, don't you? Ordinarily Tim Burton plus Helena Bonham Carter and Depp would warrant full price, but they could let me down.

It's a knife idea, but I think they fail to cut it.

And I haven't seen the blasted film yet. Doubt I will.

Cutting remarks. Slashing to the heart of the matter - I feel rather gutted by it all.

Alison Croggon saw it as well. I think her remarks cut - er, get - to the heart of the matter. Look, if you're a fan of Burton, you'll like the film. Sondheim, not so much, because it's such a through-and-through Tim Burton product. But there's a lot for musical fans as well.

What a wonderful review! Thanks for the link. Brechtian melodrama certainly sells it to me.

As for musicals, I've never been a musical buff, but it's really the same as the way I feel about opera- I think I could like it very much, but I can't quite locate my particular taste and the ones I don't like really make me want to gouge my eyes out (examples of operas/musicals P doesn't like- Carmen and Carousel- is that very wrong of me?). I loved this a few years ago, but it’s probably not very typical .

Speaking of eye-gouging operas, you can't go past Stravinsky's version of Oedipus Rex. To make it extra specially special, he got the libretto written in French (by Poulenc, no less) and then translated into Latin.

I've got some Stravinsky in my record collection, but I have not seen Oedipus Rex nor did I know that factoid. It's a bit like Beckett writing in French and then translating himself into English, only more so.

Oh, and, coincidentally, a song about playing Stravinsky, with a twist.

(It's from a musical about Lewis Carroll and Alice Liddell and the caterpiller sings it as a lesson in optimism. Indescribably delightful).

Typically, Stravinsky went out of his way to get the opera written in a language he didn't understand! He also said something about being able to treat the text as architecture, or whatever, but I can't remember that bit specifically.

I'll check that link soon, when it's quieter here at work. Thanks!

Damn, it's not the full thing! Anyway, the long and short of it: he's born without a body, just hands, and is rejected by his family, but he doesn't let it hold him back. He joins the circus and develops an act playing Stravinsky at Coney Island.

Tell me that bit about the text and architecture if you remember it. I'm interested in that sort of thing.

Oh, it would have been something about him being able to treat the text as a completely abstract object, rather than deal with both text and meaning. Stravinsky was an absolutist, he didn't really believe that music could express emotion at all, just that people experienced emotion when they listened to it. So he would have been naturally interested in writing an opera without having to deal with a meaningful text. Also, Oedipus Rex was written in his neoclassical period where these ideas would have been uppermost.

Wikipedia has a bit, but not much, more. He described Latin as 'a medium not dead, but turned to stone.'

Ah, that does give me an idea about the thing I was nutting out. Thanks!

Once again, Tim, your review does not seem to have gone far enough to satisfy your audience.

My concerns about this flick are rather shallow:
* is it too gory for me (I am a total sissy)?
* if it has Johnny Depp in it do I really care?

It's kind of weird - there's blood all over the place, but because the film is so stylised, you don't get the usual horror effect. Mr Depp does get some prominent camera action, and actually - weirdly - does make his role, as a barber/psychopath seem sympathetic. Or not.

Did you see other Burton horror things (Mars Attacks, the Nightmare Before Christmas, etc)? It's probably the same sort of effect you get from those films. They're not big on fear or paranoia, just on really impressive visuals.

Great, I'm seeing this movie tonight. And I've paid good money for it too. Well, what money is not good? My money is good!

I've seen Mars Attacks but never quite got around to seeing The Nightmare etc. Probably I'll see this - my mother is nagging me to so it can't be that bad, can it...?

Yes, I haven't seen Nightmare either. Mars Attacks contains more than its fair share of death and destruction, though. It's worth seeing, and not really horrifying, all things considered.

This is the best review of the film I've read.

Thanks, Tim, that was sweet of you.

Proserpina, to answer your question, I saw this movie and I thought it lots of ghoulish fun, even though I had my hand on my neck most of the time. I've written a review on my blog if you are interested. However I did get a cheaper price for it as I can sometimes wangle some cheaper tickets through my private health fund; that being said I would do this for most films I would bother to see at the cinema because I'm a tightarse. Pay full price, moi? Hardly ever! Surely cheapie Tuesday is the way to go! Or find a discount voucher or join the "regular go-ers club" and get a discount ... or something.

At the moment The Daily Tele is printing movie discounts in its paper, each day, so if you get the print version, you can cut out a discount voucher and use it at Hoyts that day, things like "2 tickets for $22" etc ... but I guess that's only useful info if you live in NSW. Unless News Corp is doing it in other papers too.

Oh, man, is there anything a private health fund can't do? Not only can it help you deal with the possibility of life-threatening cancer, it also gives you cheap movie tickets!

But it's only a fund with CAR or HOME private insurance which has the AAMI girl!