Whenever you say "I don't believe in fairy bread", a fairy bread maker DIES

Well, today I am pleased to say that I was a proud attendee at "International Fairy Bread Appreciation Day". My attendance at this event was somewhat aided by the fact that it was a largely notional event with no set location, based around a particular internet site. Nevertheless, it was an enjoyable occasion, full of laughter, of tears, and of reminiscences of experiences that we have all (well, me anyway) had with fairy bread.

There are many variations on the basic fairy bread theme. French fairy bread, for instance, sold in any good French boulangerie, consists of basic French rolls, covered with good French butter and sprinkled with hundreds and thousands (or, in the French language, 'hundreds e thousands'). In some cases, camembert or a local cheese is substituted for the butter. Italian fairy bread, on the other hand, is made on a pizza dough.

To mark the important and festive occasion that was "International Fairy Bread Appreciation Day", I consumed three slices of fairy bread. A few short notes on each slice follows.

SLICE 1
While not an entirely successful rendition of the concept of 'fairy bread', the first slice nevertheless managed to fulfill all of the requirements adequately. The butter was covered well, and the hundreds and thousands were spread decently over the bread. There was a gap in one corner of the bread where there weren't that many hundreds and thousands, but nothing is perfect. And it has to be said that I had to restrain myself from shuddering with pleasure as I raised the slice to my lips, and enclosed them around this heavenly slice, this manna from heaven! Blessings and benedictions to the person who first invented this delicious meal!

SLICE 2
A light and zesty slice of fairy bread shortly followed the first 'course', in which I took a decidedly minimalist approach to the concept. That is, I made the fairy bread with less butter and less hundreds and thousands (although not less bread, that would be ridiculous.) Although this resulted in the hundreds and thousands being spread somewhat sparsely, I discovered that they lingered on my palate, leaving it full of a bouquet of flavours. To paraphase that popular television show The Simpsons, "It's like there's a party in my mouth, and everyone's invited!"

SLICE 3
I rested for a time between the creation and consumption of the second slice of fairy bread and the creation and consumption of the third slice, or 'course'. Thus it was after a period of relaxation and meditation that I returned to the duty of fairy bread cooking, full of renewed vigour and creativity. This time, I decided to return to the classics, generously slapping on the butter and creating vast mountains of hundreds and thousands: curlicues of colour! I was richly rewarded for my final outburst of artistic inspiration: for, the moment the bread touched my tongue, I swooned for happiness. O the glory and grandeur that is Rome! O the wonder of fairy bread!

TOPICS FOR DISCUSSION:
- What type of bread is best used for making fairy bread? White slice, wholemeal slice, or other?

IN CONCLUSION:
Fairy bread. Eat it. 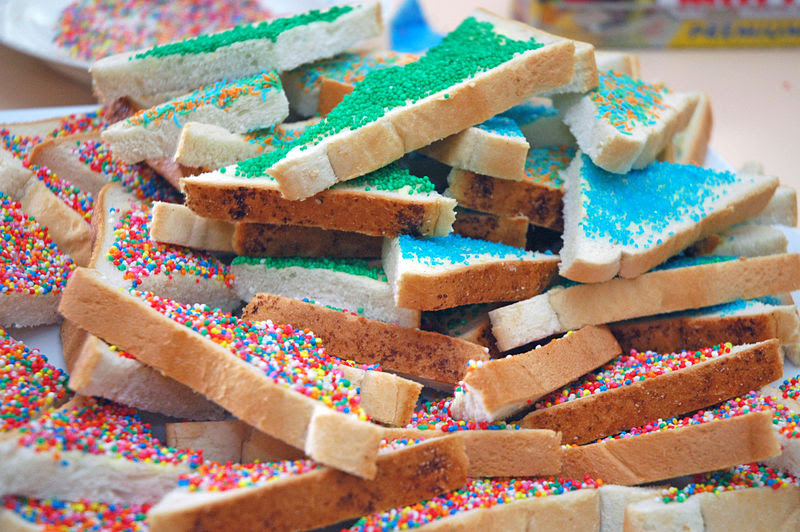 Posted by TimT at 10:42 pm
Email ThisBlogThis!Share to TwitterShare to FacebookShare to Pinterest

One day I will make a fairy bread mandala. It will be excellent and there will be photographs.

Also, white bread, anything else is a revolting concept.

Fantastic! I can't believe the day was such a success. I've really enjoyed reading this - there's so much about fairy bread than even a connoisseur such as myself was unaware of (tibetan mandala, for example, which I will explore soon!)

That one has white bread with one's fairy bread is indisputable. The real bone of contention is whether one cuts off the crusts. I believe that the crusts serve as a good counterpart to the butter and the hundreds and thousands themselves, adding further interest for the palate. I do not compromise with my fairy bread. One must use round hundreds and thousands, not those pellet-shaped imitations. Further, the sprinkles should always be in multiple colours. There's nothing sadder than a plate of fairy bread with brown pellets on top.

I only had wholemeal bead in the house on the day in question and was hesitant to use this, but I had promised to attend so ran with it and it was suprisingly good, so much so that I had it again today. don't knock it 'til you've tried it!

I didn't have any white bread in the house either!! I had to go out and buy some in the scorching heat! ...showing the true spirit of International Fairy Bread Appreciation Day.

You all display a laudable dedication to IFBAD. As a fellow votary of Fairy Bread, I thank you.