News on the booze and the screws

I was watching ABC News 24 the other day. (Well, I don't watch the television, as I told you, but let's just say it happened to be on and I happened to be near it when it happened to be on.) They were talking to federal Labor pollie Richard Marles, who's from around Geelong. Marles was banging on about the usual stuff the pollies do in the usual manner they do - not typically an incitement for listening - outside of the ALP National conference, one of those love-fests were all the Labor pollies get together and bang their collective heads together as an exercise in policy development, or something.

Anyway, Marles started talking about the importance of getting people into work. And all of a sudden, there were people in high-visibility work vests on the telly, doing things which looked very much like work. Then Marles went on to talk about the importance of an economic surplus, and how it was really important to have a strong economy. Lo and behold, images on the television appeared of a board in the stockmarkets, and people in the stockmarkets going back and forth doing important things which looked like they had something to do with money. (Then again they might have just been talking about their lunch, or just hanging out at a stockmarket party, or something, who knows.) Soon enough the subject turned to gay marriage, and - surprise - all this footage of men kissing men, and women joining hands with other women appeared on the television, almost as if they were getting married just as Marles spoke about them. After that the conversation turned to that favourite subject, 'global economic turmoil' (whatever that is - sounds to me like a kind of washing machine). What do you know, quick as a flash the ABC pointy heads displayed images of a big building with a gigantic Euro sign out the front of it, and then cut to another image of a big building with European-looking people walking outside of it (you could tell they were European-looking people because they looked just like other people).

I don't know, maybe it's just me, but it struck me as being all a bit strange. Doesn't the ABC like the idea of a politician standing in a room and talking about stuff? Do they feel the need to embellish every topic with standard stock images that they could have been running in news stories for decades? How much more literal could they have been? If Marles started talking about politicians 'sifting through the issues', would the ABC have run the image of flour running through a colander? If they could have found an image to illustrate the concept of 'conscience' they would certainly have gone with it, because the 'conscience vote' issue came up again and again.

Admittedly I'm biased. But really I think the ABC could have settled with this image of the whole conference: 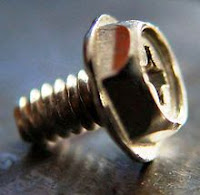 Someone's got a screw loose? Or are we all going to be screwed? Either way it sums up affairs nicely.
Posted by TimT at 12:33 pm
Email ThisBlogThis!Share to TwitterShare to FacebookShare to Pinterest