Right, now we’ve got that out of the way let’s get down to business, because the newspapers and the magazines and the periodicals and the circulars and the shows and everyone else certainly have. Did you know that Christmas is actually a pagan festival and Santa Claus actually doesn’t exist and St Nicholas probably didn’t either and he’s actually based on the Germanic God of War and what’s so Christian about the whole thing anyway and by the way how does Santa get around the world so quickly with all these presents anyway what’s with that? These undoubted facts, and other opinions like them, will be filling up all the publications at the moment. And also, did Jesus Christ ever really exist and if so he definitely almost certainly probably wasn’t the son of God and he certainly definitely almost probably wasn’t born on Christmas Day and he might not even have been born on 0 AD either so take that Christians?

It certainly is a merry and happy time of the year for newspaper columnists all over the world, isn’t it? What with the ostentatious disproving of this, and the self-satisfied deconstruction of that, it seems more or less the tradition amongst this lot to dispense with other traditions, the longer-held the better. You might think, of course, that people have always adapted traditions for their own ends, and there’s nothing wrong with that, but another tradition held by opinion columnists the world over says that that other tradition that you hold makes you an idiot.

But anyway, let’s not worry about that because did you know Christmas was actually meant to be a winter event and it was actually based on the Roman event of Saturnalia and actually it was a seasonable celebration of the winter solstice but what would Jesus say and by the way have you seen what comes out on TV at Christmas isn’t it boring oh heavens the pain why are they doing this to us? And you shouldn’t forget that isn’t Christmas shopping awful why are we spending so much money anyway isn’t this all about Mammon really it just proves how horrible capitalism really is and the Christmas office party is horrible and you won’t go and here is a list of 11 and a half tips of things to avoid at the party that you won’t go to probably involving the guy from IT and the photocopier that’s one thousand words thank you good day now please to pay.

News is the thing that distinguishes a newspaper from a toilet paper. And most of the time it’s fair to say they actually do have news to run with. The trouble is that, over Christmas, the news, or the people that are involved in the news, or the people that the news happens to, tend to pack up and go home, and all the newspapers are left with is a lot of space, and a need to fill that space.

But it’s not all bad, because did you know that in America they’ve started using the festive greeting happy holidays and isn’t that taking all the meaning out of Christmas but why should we celebrate Christmas in the first place and did you hear about the store that banned the nativity I am horrified and actually I think there’s nothing wrong with it I am so disgusted I think I might go and pass a pair of fully grown reindeers antlers and by the way did you know that Santa Claus is actually a Buddhist Ninja wearing a pair of magical underpants which he got from Atlantis and Rudolph the red-nosed reindeer was actually a communist spy that’s the significance behind the red nose bet you didn’t know that either did you no you didn’t?

I could go on and I suppose the newspapers will but in the meantime, good readers, Merry New Year, Happy Christmas, live long and prosper, and may the force be with youse all. 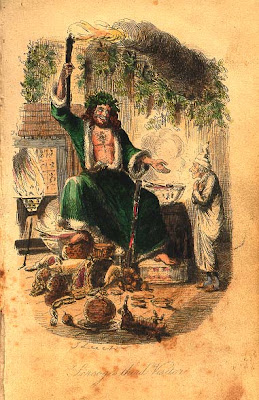 and with youse too...