Newcastle, the city that may or may not exist
Newcastle is a collection of suburbs making up a slightly bigger suburb. Some of the suburbs are highly subjective - they exist more in the mind than in reality. Alongside the Pacific Highway running into and out of Newcastle is a suburb called 'Hexham'. Just about the only distinguishing features making up the suburb of Hexham is, 1) a McDonalds, and 2) a train station. That's it. I'd Imagine the train station picks up all its business from the McDonalds, and vice versa.

Being driven back from Williamstown Airport to my parents place, we noticed amidst the trees and shrubs, a sign saying that we had entered another suburb, 'Campvale'. Where were the houses? Was this an actual suburb? A place that was going to be a suburb in another five years? A place that was once a suburb? It sure confused the hell out of me.

Another case in point is Newcastle city centre. Most city centres, of course, are places where almost nobody lives but lots of people go to sell and buy things. Newcastle city centre goes one better than this, since almost all of the shops are unoccupied. You don't live there, you don't buy there, and you don't sell there either: it's a work of art! (Also, it's not quite a city centre, either - it's on the waterfront, at the edge of town). Maybe things have worked out like this because Newcastle council believe in helping the disadvantaged - and it's much easier to help the disadvantaged in your city when there's lots of them. Think of the opportunities!

This is probably why some years ago I left Newcastle for the tram-based entertainments of Melbourne. Nevertheless, I still fly back there quite a bit to see the parents and enjoy events like TINA, and so on.

Words my father has attempted to use at scrabble
"That's Dad's scrabble style" I remarked to my parents yesterday over the scrabble boards. "He plays very obscure, hard-to-remember words that earn him almost no points at all." In fact, he played at least one low-scoring, obscure word every game. I started making a list. Here it is:

Koif
Kina
Roob (according to Dad it's an old carnie cry, whenever there's trouble at the circus tent or something like that - 'Roob, roob, hey roob!')
Bunt
Bung
Pipi
Gunarm
Leat
Leet
Gaje
Darg
Kepi
Baan

We let him get away with most of these. Not all, though.

Things the dog tried to eat during my six-day visit
Two tennis balls
Two cockroach baits
The bright yellow napkin I'd been using as a bookmark
The pink frisbee
My smelly black socks
Dad's smelly black socks
My brother's smelly white socks
Something I didn't see in the park (possibly a pinecone?)
An old shirt of mine

Oh yeah, she also tried to herd my nephew, nipped at my feet, and hunted several smaller mostly feathered animals. On Christmas, I took her for a walk in the park, and she hunted, in quick succession, 1) a magpie, 2) a family of ducks 3) an abandoned beer bottle sitting on the ground. 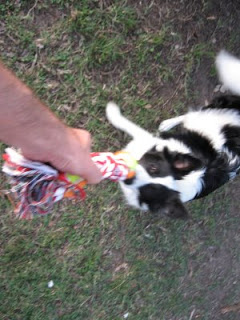 Trains, mobile. Also, Train's Mobile
Pottering off to Lake Macquarie yesterday with father, mother, and brother, so Dad could get a bit of target practice shooting arrows we noticed really weird stuff going down with my mobile phone. You see, it latches on to the closest reception tower in the area and tells me where I am - or at least it tries to. Going through some of Newcastle's lesser-populated suburbs, it came up with some rather imaginative suggestions as to where we were located. Driving onto the Pacific Highway down to Hexham, it thought we were at the university. When we reached Fennel Bay, it said we were in Fassifern. When we got to Fassifern, it said we were in Toronto. When we reached Toronto, it said that we were in Toronto, but considering its track record at that stage, I think it was just a one-off accident. At a few points while we were driving back from Toronto, it said we were in the mysterious suburb of 'Emergency Signal Only'. That's a funny name for a suburb... And true, it did say we were in Heatherbrae when we drove through Heatherbrae, but by the time we got into Raymond Terrace, it said we were still in Heatherbrae.

Oh, and later in the day, at Williamstown airport, which you would have thought was at Williamstown, it said we were at Salt Ash. Go figure.
Posted by TimT at 9:35 am
Email ThisBlogThis!Share to TwitterShare to FacebookShare to Pinterest

Not much of a travelogue, but it should at least give you an idea of what I did on my holidays: 1) played scrabble 2) encouraged the dog to be naughty.

I went to Tasmania a while back and had a similar experience. It was, hey, we drive along a road for hours. We stop at a so-called town. I think it is made up of one cafe and one newsagency struggling to be a town. Get out and take lots of touristy pictures. Pose in front of cafe! Pose in front of newsagency! Make crazy poses in front of roadway and snap more pics. Next stop!

Your dog seems to adore smelly socks. You should have no problem getting her a great Christmas gift she will really love. And you have an excuse not to wash a sock, starting from today, in order to give her that home made present she will really appreciate.

An excellent idea. I shall start wearing my socks out (and in (and out (and in (etc)))) now. A couple of months should suffice...

Reading that was like taking a train trip from Newcastle to Sydney only without the hassle or the very weird folk who congregate at Woy Woy.

Topiary much enjoyed hearing about a vacation even more aimless than hers, but including a much cuter dog.

Plus, reading about your vacation is not only much cheaper than taking one of one's own, but avoids the hours in the car/train/plane and time spent waiting in lines.

Newcastle is a strange place. My bother lived there a while back and I went to visit him once. He lived in a place called new lambton which was fairly suburban except it had no real shopping centre, just a collection of houses, a police station and a little IGA or something. The city centre is a marvel to behold. It is the smallest centre of a city I have ever seen. I don't know why anyone would want or need to go there, ever. There are a few pubs there, I guess that's the reason.